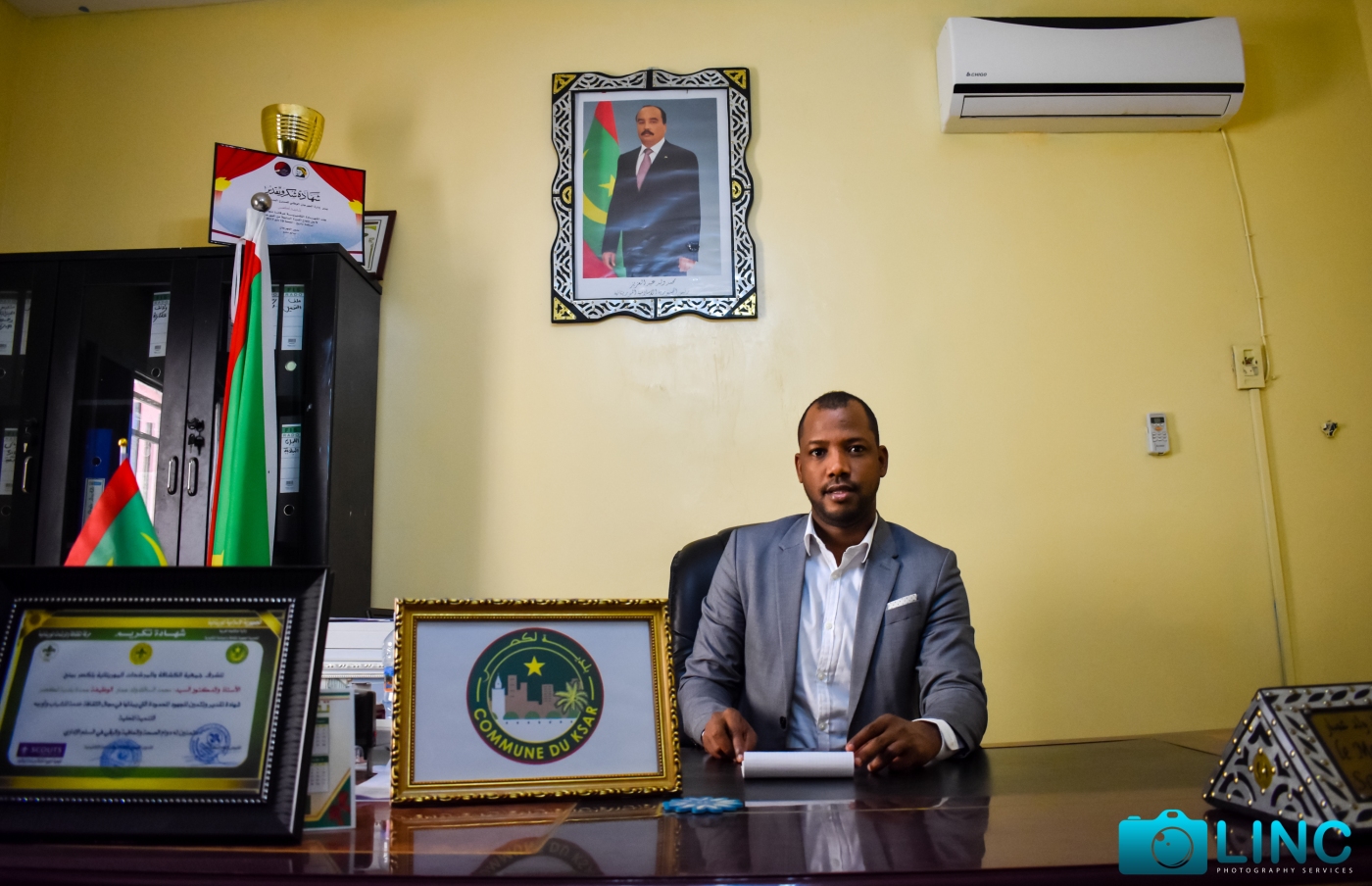 Dr. Mohamed Saleck Oumar stands out as one of the brightest Mauritanian young men!  He succeeded in both the political and the academic domains. Today, Dr. Mohamed Saleck is a professor of English at several universities and, the mayor of the municipality of Ksar, the most important municipality in Nouakchott.  We’ve had the pleasure to meet him and conduct the following interview:

Can you give us a glimpse about your childhood, where did you grow up and where was your hometown?

I was born in 1984 in Atar city; I received my primary and secondary education in Atar and got my baccalaureate in Arabic literature in 2003. I then I had to go to Nouakchott to enroll in the English department at the University of Nouakchott.

Why did you choose English?

Actually Arabic was my first option, till one of my friends made me change my opinion, he suggested to me to enroll in the English Department for it was better for me to learn a new language than to continue on one that I had already mastered; his words made sense so I decided to switch to English.

where did you get your Master’s degree?

After I graduated from Nouakchott University I received a scholarship and went to study in Morocco, I continued in “Gender Studies” and also got my Ph.D. and worked on a dissertation paper entitled: “Women Interpreters of the Quran”. My thesis was about how Muslim women dealt with three controversial topics about women in the Qur’an which were Male Guardianship, Polygamy, and the Creation Story; I wanted to know about the female perspective on these thorny topics.

How did English impact your life and career?

Well, English was an important bridge to other cultures and communities; it facilitated the communication process, it also helped me understand their customs and traditions and changed some of the stereotypical images I had about the West, today I have various friends from different nationalities all gathered thanks to my knowledge of English.

How did you begin your teaching experience?

My teaching experience began during my study days in Morocco.

How did you start your political career?

We needed change in Mauritania, and the current president of the Republic wanted young people to be involved into the building process. He was serious about it and thought the country would go ahead only through the participation of youth.  The Union for the Republic Party founded by His Excellency Mohamed Ould Abdel Aziz chose me as a suitable candidate. I did not hesitate to answer their call of duty.

What were the obstacles that faced you since you became the mayor of the municipality of Ksar?

I faced various obstacles indeed! at the beginning the nature of working in the public field was a bit confusing, but with time I managed to adapt, also the municipality was in a complete chaos, the employees were not paid on a monthly basis. They had 7 month of unpaid salaries, the municipal work of Ksar was a mess when we took office!

Did you solve any of these problems?

We (I mean the whole city council) managed to solve the majority of these problems. Now, our employees are paid on a monthly basis; their wages had doubled, we do a lot of social work, we help orphans in schools, we build unified gates for all the schools in Ksar, we constructed the municipal hospital and so, I could go on and on

Do you have a direct contact with the citizens?

My door is always open for them, I hear their complains and try to fulfill their demands or transfer them to the right place, in fact, we aspire for a betterment of the decentralization system. Mayor need to be given more responsibilities. They legally deserve to be given more authority as representatives of the state and the people.

Do you see yourself more in the public or the academic field?

Both are interesting! Being a mayor is a great honor! Through it you could incur positive change that reaches out to the poor people! As to academia, I have written various articles for different news papers.  I also still aspire to open a new Master in Public Relations and Communication, but in order to achieve that I must free myself at least for the first two years which is not possible due to my position as a mayor, so as you could see the public field time consuming. As to politics; the greatness of it lies in the service of people!

What is your advice for the next generation that wants to follow your steps?

My advice for the younger generation is to try and combine both; the academic and political work, both of them are important, one holds the lesson of changing mentalities which can only happen by scientific knowledge and good education, while the other stands for change at the grassroots level. Still, the country must be led by an educated and enlightened generation, a generation that can make a difference.

My name is Chevie Baba Aka LINC  a  Mauritanian Photographer  ,my pictures are documenting people and places everywhere inside Mauritania to spread cultures through storytelling pictures . I’m also an event Photographer and a photojournalist .